Boschveld Chickens was founded by Mike Bosch, a native of Zimbabwe. His innovative ancestors definitely left a mark throughout Africa, Mike continued this tradition in his own unique way.. 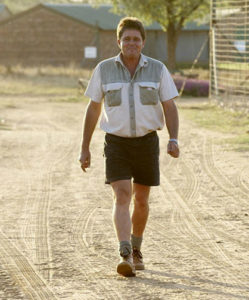 Mike is a well known Beefmaster and Boran breeder and started breeding chickens as a form of tick control, the “Boschveld breed” consists of Namibian Ovambo chickens, Matabele chickens and good egg-laying Venda chicken from the north of Limpopo. With this breed Boschveld Chickens was able to reduce dipping from 26 times a year to a mere 14 times. Boschveld Chickens then soon developed into  full-fledged chicken enterprise which today has expanded throughout much of Africa. Boschveld chickens has grown to such an extent that the enterprise now uses a modern hatchery instead of nest hatches and a incubator made from a converted refrigerator. Today, approximately 60 000 eggs are placed in the modern incubators every three weeks with a hatching rate of 85%.

With Boschveld chickens expanding Mike then realised that there is a need in most of the rural areas, although farmers had enough water for subsistence farming, they still lacked good quality seed, livestock and fertiliser. Most farmers and the people in their communities do not have refrigerators this is a problem because the chickens are popular and a household can slaughter one chicken at a time and use the meat before it spoils. Over the years, however, the typical African chicken has grown smaller because of inbreeding – this then resulted in malnutrition and famine among the children in rural areas in Africa. Mike realised that Boschveld Chickens can provide answers to the malnutrition, hunger and poverty in these rural areas. With all this in mind Mike then developed a comprehensive chicken farming system that would provide subsistence farmers with everything they need to feed their families a well-balanced diet while generating an income. 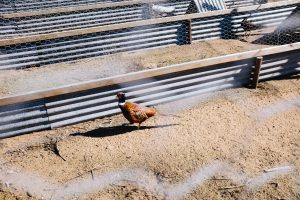 This system is made up of a movable chicken run, 150 chicks, a solar panel, twelve weeks worth of chicken feed and ten fruit and nut trees. The chicken run is 6m x 3m and is made from tubular metal, screening wire, corrugated iron and is also easy to move around. The hens lay an average of 200 eggs each year and produce an average carcass of 1,4kg.

Farmers can choose which type of vegetable seed they would like to receive as part of their package. Each month the chicken run is moved, and a patch of fertilized soil becomes available where the seed can be planted. Moving it often also reduces the risk of harmful organisms accumulating. After another month, another piece of fertilized soil becomes available on which the family can continue planting seeds. Good quality seed allows these farmers to achieve good yields. The fruit and nut trees, which are also the farmer’s choice, are planted around the house and are fertilized using chicken manure. The trees can be watered with grey water and provide fresh fruit and nuts to supplement the family’s diet.

Another great advantage of this system is the solar panel that comes with the chicken run. Consisting of a 50W system with a battery pack that powers four low-energy lights, two USB ports and a 12V connector, it offers numerous benefits. This light helps for security and also allows children to do their homework at night. The system can also serve as a source of income because owners can charge up to 13 cell phones a day for an asking price of approximately R7,00. 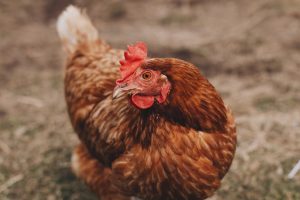 These systems have had a positive impact on the income of the farmers and prove to grow even bigger resulting to date, none of these systems have failed as they are well planned, simple to operate and also allow women in rural areas to be self-sufficient and earn an income.

Mike says finding a viable and sustainable solution to Africa’s problems was imperative, and he is happy to see that it is successful. It has the added benefit of making his own business more sustainable. All thanks to the Boschveld chicken.